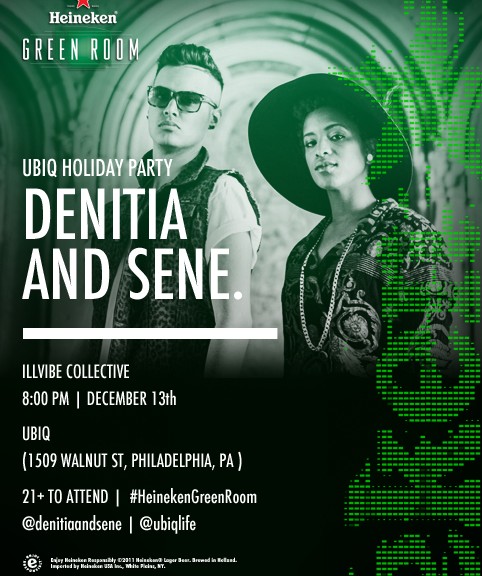 It’s been said that insanity is doing the same thing over and over expecting different results. I figure I’d start chronicling my lapse of insanity where I keep going to music events and parties under the delusion that I’ll magically cease to be awkward upon entering. Hence the insanity, that has yet to happen. Granted, I should probably stop going to things by myself, but nobody goes with me anywhere. And why should I sit out on things just because I have no friends? I’ll just make new friends there, duh!

Not this time, though. My first adventure in awkward will be last night’s show, the Heineken Green Room featuring Denitia and Sene and the Illvibe Collective. So did I have fun? Well,

It was supposed to be a holiday party. And I had another holiday party at my favorite coffeeshop I was going to just before that, so naturally I threw on my ugly sweater. It’s the perfect ugly sweater too. While I was looking for one that was oversized and super ratchet, I found this nice-fitting one last year that’s a solid burgundy red with a big fuzzy sheep slapped on the middle. At least I think it’s a sheep. It could be a giant white fuzzy…shape, with eyes. Who’s to know? But I love it and I couldn’t wait for its debut and tonight was the night. I mean what else am I supposed to wear to a holiday party?

Something else, apparently. Because I get to this place, and these people are just too cool. The club can’t handle these guys. Literally. They’re so cool they threw a party in a shoe store. I ran into one of my coworkers and met her friends. They were alright. I couldn’t squeeze into any of their conversations so instead of following my friend around I figured I’d go do me somewhere…whatever that was supposed to mean. I went upstairs to where everything was happening. I grabbed a beer…and I discovered Heineken is kinda gross. I look on at the mass of people, and I’m like…I am going to do…something. Yes.

Went up to say hi to the djs I knew. But they were talking to people and doing stuff and I was like…neeeevermind maybe later.

Found my friend again and met some dude she knows.

I told him my name was Stormy and as per typical, he didn’t believe that was my real name.

“What, you wanna see my ID or something?”

Oh, is that some crude innuendo?… Ew.

I don’t get what would compel dude to say that, but I didn’t much appreciate it. Does that actually get results? Am I the strange one here? Should that have read like poetry to me or something? Because I repeat, EW. And he kept looking at me and gazing up and down and I gave him hella stank face, like, what are you looking at? Is it the sweater? I can tell you where I got it. Just stop it with the eyes, it’s so not cute. You’re not cute. So much ew. Too much ew.

Need to find way to esca—Hey! Dude I like! Dude who is very un-ew! Perfect, I’m gonna talk to him and get away from this creeper. Hugs and how are yous, aaaaand, dammit he’s gone. But no, wait, conversation or something! No? No. Oh well, it was excuse enough for me to wander away from Ew (yes that’s his name now). Ew kept showing up at random and bumping into me. I mean physically walking up and leaning into me til I almost fall over like that’s something to do. And I’m thinking, um excuse me sir, could you not. I’m trying to like…stand and whatever. Don’t I look out of place enough without you throwing off my equilibrium? What was his deal? There was plenty of space for him to stand somewhere that wasn’t, y’know, ALL UP ON ME.

I kept seeing people who I recognized from the Internet. I wanted to talk to them. I wanted to tell them how much I liked their hair. But you can’t walk up to people you’ve kinda seen online before. They’re strangers. But you know of them kind of. To speak to them is to try and conceal the fact that you already know their name, or you were at that concert last week that they went to, and woah wasn’t it great?  Yeah…I stayed in my corner.

My phone was getting pretty low on power, meaning I couldn’t stand around and text until it was time to leave. So I went downstairs and stood around my friend’s group again, and kind of conversed a little bit. Not much, but I did, so point for me. Then I shuffled…I don’t even know, elsewhere.

Three times was enough. I wanted to slide out and leave but that would have defeated my purpose for coming, which was to see Denitia and Sene. So I continued to wallflower, giving up on battery conservation and texting anyways. And FINALLY, Denitia and Sene came up to perform. And they were fantastic. I stood right up at the front of the stage, sang all the songs I knew, danced a tad, and it was great.

Since my phone was too dead for pictures, I asked them for hugs when they got off stage. Hugs abounded! Denitia was like, “I saw you rockin’ with us!” She did see me rockin’ with them. I saw her seeing me rocking with them. She gave me a couple approving nods during the show, it was cool. They’re chill people, I look forward to more releases by them.

And then I was free. No longer bound to stick around anymore, so I left. Well not quite that fast. I creepily waited until I spotted un-ew dude I like so I could say bye. And I did. And then I left.

So did I have fun?

I actually think I did.

None of that really sounds like I had fun, but I’m looking back at yesterday like, huh that wasn’t so bad.

You know how most women can’t remember labor pains outside of them being terrible? That’s kinda how I am about going out by myself. You should see my book of contemplating where I wrote last night. It’s like, I’m just gonna stay in my lane and chill with my cat and write about nonsense, only enjoying music via the Internet WHERE I BELONG. WHERE EVERYTHING MAKES SENSE. And yeah, that was pretty dramatic. Call me a glutton for punishment, but I’ll no doubt be going to another event with the expectation that I’ll social like I’ve never social-ed and I’ll be the life of the room. It’ll happen guys, I know it will. And you’ll be hearing about it. Until next time.

Oh, by the way, you should check out Denitia and Sene, because they’re my favorite people in music this week. And here’s one of my favorite songs: