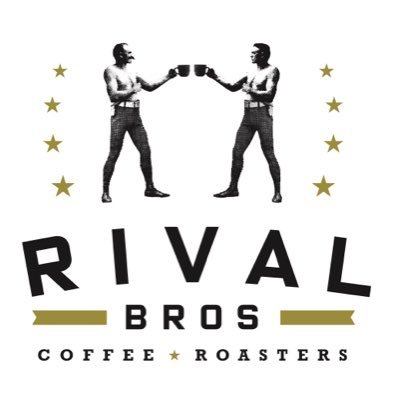 Rival Bros is one of my favorite coffee shops. I wish I could make it over to the store more often, but it’s a little out of the way, being located at 24th and Lombard and all. 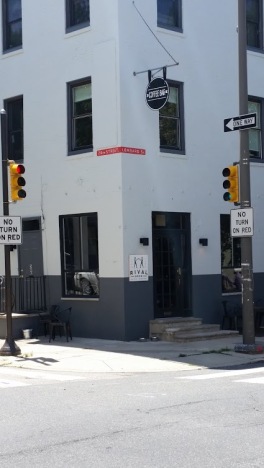 I discovered them at the Manayunk StrEAT Food Festival, and the latte I got was fantastic. I was talking to the guys in the truck while they made my order as well and they were super pleasant and informative and whatnot. As I do with all of those food festivals, I followed them on all the social medias, and I later discovered that they were working on opening a store. I was excited to visit when they opened, and I wasn’t disappointed.

As I already knew from the truck, the coffee is great. My latte is smooth with no bitterness, the vanilla is subtle but very…there, and the espresso is pronounced well and not overpowered by the vanilla or the milk. Look at me, trying to explain coffee like some connoisseur. I don’t really know what I’m talking about, and I don’t speak barista so don’t yell at me. The coffee is good. And their mugs are nice.

The baristas who work there are friendly. I like harassing employees at food establishments, so I like talking to people, but they’re a little more to themselves except when conversating with the regulars. Nothing wrong with that, and it might just be me. I’m socially awkward even though I enjoy throwing myself into social situations. But yeah, I never got the vibe that I should attempt small talk with them. They are very informative and know their coffee though, and they are always helpful in answering questions and figuring out what it is you want when you don’t really know what you want.

Rival Bros has a decent menu. They have espresso drinks I’ve never heard of, mainly because I’m just barely past a Starbucks level understanding of coffee. Their menu is very simple, and they have more offerings than what is displayed, and if you ask the baristas about more things, like flavors for lattes and whatnot, they’ll tell you more. And they have food! And pastry! And it’s good. I had a chocolate croissant once and I was pleased. They have sandwiches and even ice cream! Well I don’t know if they’ll be serving ice cream throughout the fall and winter, but they might. Because they get their ice cream/ice cream sandwiches from Zsa’s Ice Cream, which if you haven’t had, you should have. Oh, and they get all of their foodstuffs from High Street on Market, so yeah. Good stuff.

I get good vibes from Rivals. It’s a small space, but I don’t feel cramped unless there is a ridiculous amount of people who refuse to leave, much like myself. That happens, but not too often. There’s a decent natural light coming in, and they use darker colors, like navy and gray. It puts me in a more focused, but deeper mood, and if I get the idea to write about something more serious, I go to Rival Bros. And not necessarily more serious, but even just more peaceful topics with less tirades. I actually find it difficult to be funny there. Or at least not in the erratic direction my humor usually starts heading. It’s too sophisticated of an atmosphere in there, and if you have to think really hard to produce nonsense, it’s just not meant to be. My post, Nobody’s Immune was written at Rivals. So yeah. I have not fully evaluated the space, and I always end up sitting at the same table, but there’s an electrical outlet right there, so I always have power. I believe there’s an outlet by the couch they have as well. The seating is comfortable. And there is music, but it isn’t too loud. I actually haven’t listened to it much before putting on my own tunes, which is weird, I usually listen in. So I can’t tell you if the music is questionable with bizarre lyrics about counting freckles and eating mayonnaise, so sorry. I’ll pay attention next time I go. But me having no memory of the music should be considered a good thing, because oh my goodness some places and their playlists! It’s such a mess.

Uhmmm, so Rival Bros’ bathroom is a freaking work of artness. It is beautiful. You almost want to walk somewhere else to another bathroom so you don’t make it less nice. I walked in there feeling like Doge.

It means nothing, but their bathroom has two trash receptacles. TWO TRASH CANS. I don’t know why I noticed or why I cared, but yeah. There’s two. And I never know which one to use. So I use both. Don’t judge me. So the bathroom is really nice, okay? Feel free to pee there. I’m done with my review. Go there. The end.