Hiya guys! Check out my face, located below! You’re welcome, in advance ;) 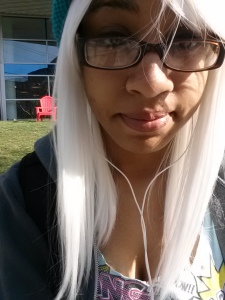 That would be what I look like today(meaning yesterday, because I was writing this, got distracted, and then took a nap into the next day). Why white hair? Well, because I’m Storm dammit, and I do what I want!

Truth of the matter, though, is that my hair underneath that wig is a serious force to be reckoned with. And I had no energy to do any reckoning this morning. I really dig my hair, don’t get me wrong. But I never knew it was such an awesome, curly, explosion of HELL YEAH until a year ago. And I’m learning more things about how to take care of it every single day. Today’s lesson: Stop being lazy and put it up before bed, you know better.

But anyways, what I’ve learned from wearing this thing, as well as wearing some other wigs I have in public, is that there is a lot one can get away with when claiming to be an artist.

I really like the arts, even though I’m not as immersed in the world of art as much as I’d wish. I just severely lack the skill and innovation. I knit and crochet a bit, so I have an ‘in,’ I’m a fiber artist, if you will. And I milk that for seriously all it’s worth.

I enjoy the louder things in life. I’m way too weird to hide it, but I’m allowed to be, because I’m an ARTIST. As an artist, you can do, say, wear anything you want, act any way you’d like, be all the crazy you can, and provide no answers for your behavior. It’s fabulous, because I hate answering questions. Plus, the reasoning behind my actions are usually much less interesting than the answers people provide for themselves. And the best part, is that as an artist, your  creativity isn’t just accepted, it’s encouraged. You are all of the strange your normie friends are afraid to be. You’re kinda like a hero, taking on crazy so everyone else can be sane. Now I don’t much understand sanity’s appeal, but to each his own. I guess that’s what makes me an artist.

I remember back in high school, I decided to actually make an effort to look kinda okay sometimes. For some reason, in my mind that meant nail polish. I have some perfectionist tendencies though, and I would get so frustrated trying to paint my dominant hand, that I just wouldn’t. I’d rather it be barren than look stupid and messed up. So only my left hand would ever have color. When people asked me why, it was around the time Michael Jackson passed away, and I told people that I was in mourning, showing my support, but it was too hot to wear a glove.

Oh man, I was sooooo DEEP. I accidentally started a small trend for a week or so. Based on a bunch of bull. But I’m an artist, so it made all the sense in the world, you just don’t get it. After a while, I couldn’t keep using that excuse. But I still use the guise of being an artist to do what I want. Nail polish isn’t fashion for me, it functions for protection against my split nails snagging my yarn. I only need one hand painted for that. And behold, I fascinate people, as I changed the entire purpose of nail polish for the sake of art.

It makes you think… How much power do artists have in doing things that aren’t normal and not being questioned? They, we, have all the power. We make culture. We make nonsense make sense. And then make it nonsensical all over again. It’s as beautiful as it is terrifying. And I like it. I went to the Philadelphia Art Museum recently, and making silly commentary with my mother about the artwork made me ask some interesting questions. But I think I’ll cover those in another post. Until later, everyone.